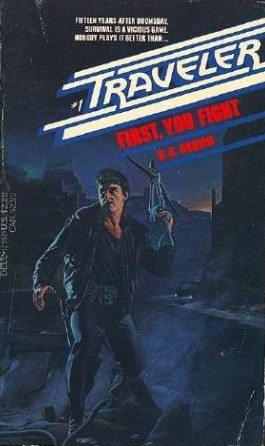 A nuclear holocaust happens in 1989 (they must not have expected this to be a long-running series: the 13th and final volume came out in 1987, just in time) during the presidency of an ex-cowboy-movie-star named Andrew Frayling (middle name probably Ronaldwilsonreagan). Special forces soldier Kiel Paxton loses his wife and infant son to the bombs, and he's also suffering from a dose of nerve gas he picked up on a mission in Central America. It's left him with heightened senses (and a sixth kind of "spidey sense" that helps warn him of trouble), but it makes it difficult for him to be around people because their energy keys him up. He has a minivan called the "Meat Wagon" (with a Wankel engine that'll run on most any combustible fluid) and a bunch of weapons, so he drives around taking mercenary jobs for gas, food, and ammo. While escaping an army of roadrats he goes into a city in Utah and finds himself in the middle of a Fistful of Dollars situation, with two competing warlords both wanting to hire him... or kill him to stop him from working for the other. Both of them want him to capture a weapons shipment from an army of vicious "Glory Boys" - former military types gone bandit - and they send him to scout that out... but Traveler decides the townspeople would be better off if all three warring factions were laid to rest. But while doing that he also has to battle his own seizures and freak-outs from all the stress being put on his wrecked nerves. This Road Warrior-inspired series grew more sci-fi-ish (and silly) as it went along... if I remember correctly by the third or fourth book a guy riding a giant mutant housecat shows up. I know sci-fi (and Specialist series) author John Shirley was "D. B. Drumm" for at least a few of these books, but I don't think this was one of them; he's probably responsible for the sci-fi element being upped. But this one's pretty straightforward and the writing's good and the story keeps moving at a fast clip.

According to Thomas M. Disch's The Dreams Our Stuff Is Made Of, "D. B. Drumm" was originally a pseudonymn for Ed Naha, but the later volumes were written by cyberpunk writer John Shirley.