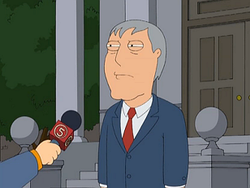 I wrote on a show called Johnny Bravo when I was at Hanna-Barbera, and he guest-starred as himself. He was so funny, and he's got this way about him. I think he likes playing into what he's known for, even on a casual basis. He's a really fun guy to work with, and genuinely gets comedy. It's not the type of situation where you just bring somebody in to make fun of themselves. The character we've created is kind of this alternate-universe Adam West where he's mayor of this town, and we deliberately have not made any references to Batman, because we like keeping that separate. It's the obvious place to go. We tried it, we thought it would be funny to do something different with the mayor of this town. People like Clint Eastwood and Martin Sheen who have taken whacks at this sort of thing–there's a precedent for it, actors getting into politics. He's the mayor, but he's this guy who clearly does not have it all together. The first couple episodes we did, we got a great response from fans in their teens, who I can't imagine, necessarily, know who he is from the old Batman show. He's one of the characters we get the most requests for more of. It's nice, because to me it means we've built a funny character around him that doesn't just play off of the fact that he's a celebrity. He's playing himself, but he's not playing himself.